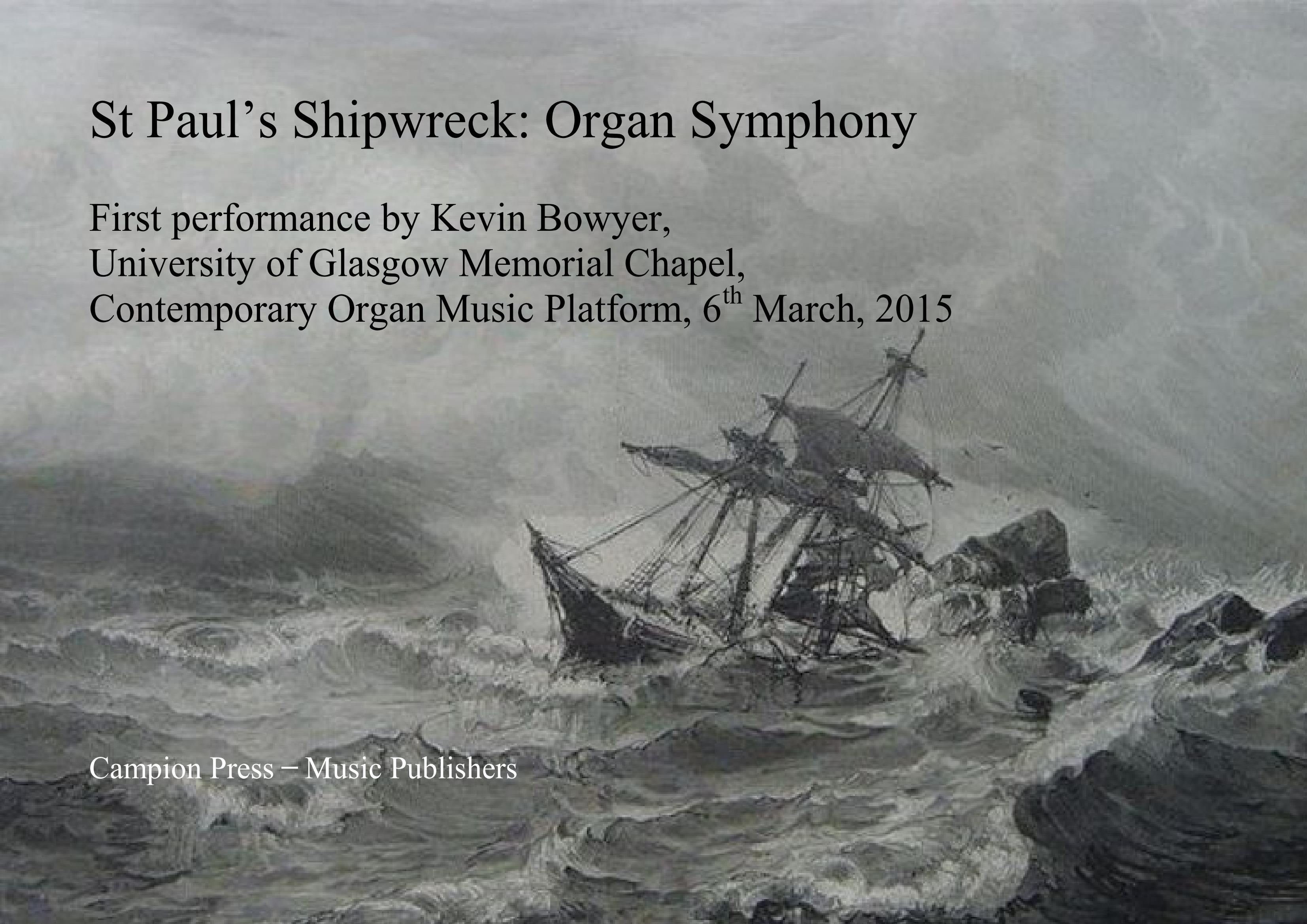 In 2011, I was invited to adjudicate a composersʼ competition on . The dramatic nature of the natural ochre landscape and the human monuments, from the  megalithic temple to the Great Mother, Ħaġar Qim, to the huge Caravaggio canvass - The Beheading of John the Baptist - inspired local composers to write works of burning intensity of cyclopean scale, many refusing to blindly adopt the current contemporary trends. The godfather of this current Maltese school was Charles Camilleri. I was aware that Kevin Bowyer had made distinguished pioneering recordings of the works of this composer, so it seemed natural to dedicate a new work to Kevin inspired by the individuality of the Maltese muse. Home to the Grand Masters of the Knights of the Military Order of Saint John in Malta, it is not surprising that many islanders continue to profess a strong Catholic faith. A work drawing on St Paulʼs shipwreck on seemed inevitable.

The saint is represented by a quote from the plainsong versicle of the Alleluia from the Mass for Commemoration of St Paul, Apostle beginning Sancte Paule Apostole... D G G A G F etc. As the storm rages, his diatonic ʻinnocenceʼ is destroyed chromatically, by thickening with parallel harmonies, thematic development and canonic presentation.

The point of departure for the work was the opening pedal solo suggesting the brooding anger of the sea which boils over into leaping figures - accompanied in the upper voices with dissonant harmonies - redolent of storm clouds: it is heard 10 times in total throughout the work, each time with harmonisations representing different atmospheric states. It is only at the end of the piece, after stylised thunderbolts alluding to Messiaenʼs Dieu parmi nous figure, and further turbulence, that the leaping figure is finally drenched with blazing Mediterranean sun, whilst the spirit of Tippett sings as Noahʼs messenger-bird, hovering over the face of the waters at earlier moments of relative repose. 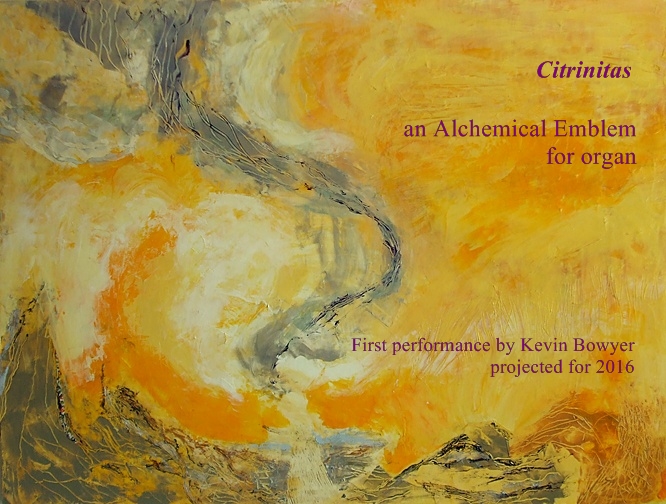 Reproduced by kind permission of the artist. http://maureenmaki.com

on 6th March 2015 in the University of Glasgow Memorial Chapel, the alchemical researches of Adam McLean, and the Universityʼs Ferguson Collection - a repository of significant Alchemical incunabula and manuscripts such as those by Philippus Aureolus Theophrastus Bombastus von Hohenheim and others of equivocal authorship such as the 15 century Aurora consurgens, allegedly by Thomas Aquinas, the Tabula Smaragdina, translated by Isaac Newton and The Rosary of the Philosophers, an 18th century English translation of the 16th century German work.

Citrinitas is the third, yellow, stage in the alchemical Magnum Opus. It is interpreted in many ways, from chemical processes to the development of the psyche. Pursuing the latter interpretation, the first stage is the Nigredo, the Prima Materia, or the blackness of the undifferentiated, undeveloped psyche. The second stage is the Albedo or Whitening - the individuation  of the psyche has begun by the separation of the animus from the anima - the solar male principle from the female lunar principle. The anima flies to the stars whilst the anima, or female principle sinks to the cave. Citrinitas, the yellowing, is a process associated with ageing - the animus, the male solar principle can no longer fly, but sinks to the cave, aware now of his physical limitations whilst the anima, the dreaming goddess, can now ascend to the stars, as dreams become the only possible reality and the work ends in preparation for the final, fourth stage of the Magnum Opus... 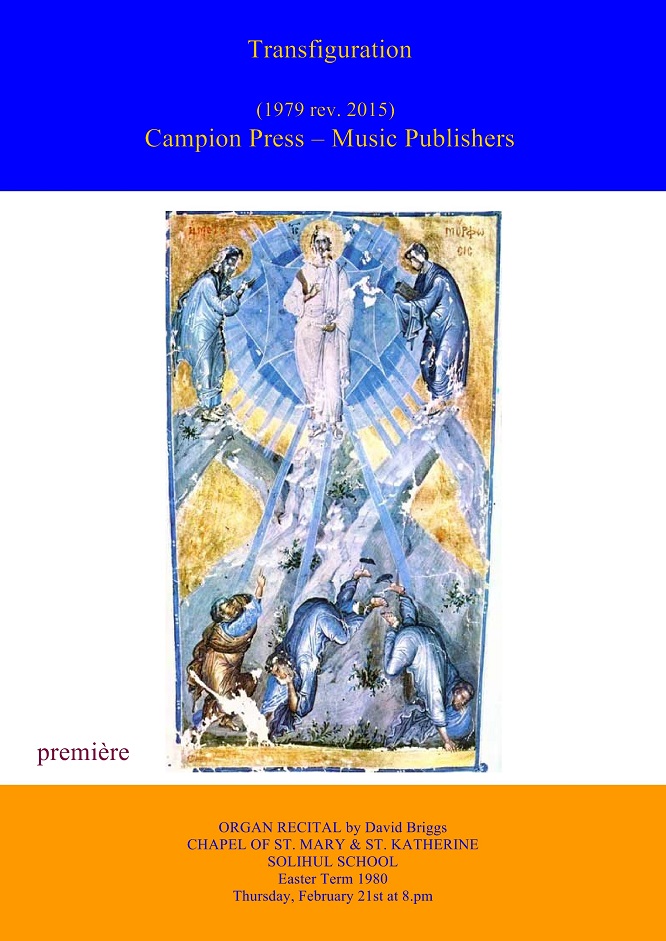 The programme note for the first performance

Geoffrey Alvarez is a former member of the National Youth Orchestra and lives in London. He is currently studying Violin and Composition at the Royal Academy of Music. Transfiguration was commissioned by David Briggs in 1977. The work is based upon a complex tone-row and shows the influence of Messiaen and Boulez.

The revised version was prepared by Geoffrey Álvarez in April 2015 in response to a request by Kevin Bowyer for a copy of the work following his premiere of St Paul’s Shipwreck in the presence of the composer in Glasgow University Memorial Chapel in March, 2015.

All Hallows by the Tower, November 2007

back to home page